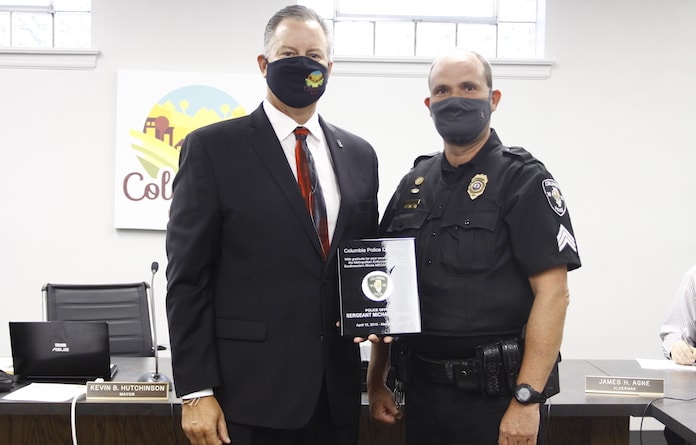 Columbia recognized a sergeant for his contributions among other business at Monday night’s Columbia City Council meeting.

CPD Sgt. Mike Conrad was then recognized for five years of service with the Metropolitan Enforcement Group of Southwestern Illinois drug task force. The group consists of Illinois State Police and local police from 10 different precincts in the area who work together with federal authorities to combat drug-related crime.

Conrad, who worked with MEGSI from April 2015 through March 2020, began as an agent and was promoted to squad supervisor in 2017 and then deputy chief in 2019. The deputy supervisor is second in command of the unit and oversees daily operations.

Conrad thanked Columbia Police Chief Jerry Paul for “bearing with me through all of this,” adding that he thanked “more than anything, my family, for understanding why I leave and why I wasn’t home when I should have been home and all the sad things I saw and they had to deal with.”

Conrad had worked in an undercover role and worked to combat methamphetamine trafficking.

Chief Paul addressed the council, explaining that he could not give Conrad recognition during his time with MEGSI because cases were active, but promised to let the city “know about all the great work” Conrad did when able.

Paul said Conrad’s work with the group led to the reopening of a cold case involving a murdered district attorney informant. Conrad worked with the FBI and U.S. Attorney General’s office and the suspects in the case were charged and are currently incarcerated.

Paul also noted Conrad was awarded three times during his tenure with MEGSI “for outstanding performance in federal drug and weapons investigations.”

“He’s bringing his experience to our officers,” Paul said of Conrad.

Hutchinson pointed out that while local police working with a task force can be perceived as “losing an officer,” Conrad shows “it is so obvious how important that is and the knowledge that he brings back to the community.”

The most notable development involved the DeRossett Investment building that will be erected on the 11 South complex. Koch credited the new enterprise zone for the company establishing a presence in Columbia.

Columbia Assistant to the City Administrator Sue Spargo announced a “household hazard” event with the Illinois EPA has been approved, tentatively scheduled for May 2021.

The event will benefit all of Monroe County, and Spargo said she is currently working with county officials as well as Waterloo and Valmeyer to secure a location, volunteers and advertising for the event.