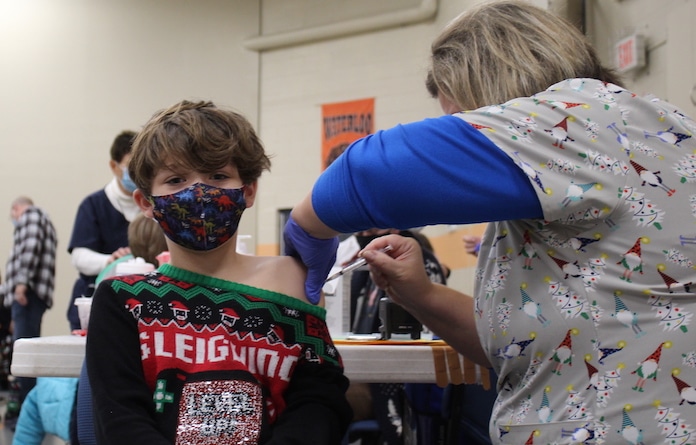 Monroe County’s COVID count is not slowing down, creating a distressing situation as holiday festivities continue.

One new death was reported over the Christmas holiday weekend, bringing the Monroe County’s total COVID-related death count to 108. Monroe County Health Department Administrator John Wagner said this most recent death was a male in his 50s.

On Monday afternoon, Wagner said the local health department is aware of 218 active cases and 15 hospitalizations.

Wagner said the majority of local residents who have died from COVID since the vaccine became available were unvaccinated, and stressed that being vaccinated can reduce one’s risk of hospitalization should they be infected with any of the COVID variants.

Last week, St. Louis Metropolitan Pandemic Task Force reported 118 people have been admitted to area hospitals over the past 24 hours due to COVID – the largest single-day patient influx in nearly a year.

Illinois is set to see a change in COVID contact tracing come Jan. 13. The change was initially set to begin Tuesday, but IDPH pushed back the start date. Instead of local health departments handling contact tracing, a centralized data center will be used.

Wagner said those who test positive for COVID will receive either an automated call or text message informing them of their test results, quarantine guidelines and telling them to notify their close contacts. From there, they may opt in to speak to somebody at the center directly. Those ages 65 and older will get a call.

This new means of informing individuals of their positive test results will still start on Tuesday, the local health department said on Facebook.

Wagner has many concerns surrounding the new system, such as how employers can confirm an employee is sick and is quarantining appropriately, how the centralized system will reach individuals in nursing homes and more.

He said it is still not known how possible outbreaks in schools or within the community will be brought to the health department’s attention.

“A lot of the problems have not been thought through on the way that they’re wanting to do it,” Wagner said. “Hopefully we’ll get the kinks worked out fairly quickly, but in the meantime, it’s going to be a mess.”

From initial indications, the Omicron variant appears to be highly transmissible compared to other coronavirus variants. Wagner said there are two different schools of thought on what this could mean for the pandemic’s future: it could mutate into yet another variant or, if it infects enough people, it could perpetuate herd immunity to the Omicron variant.

However, nobody is certain which – if either – will be the case, Wagner said.

While maintaining a healthy lifestyle can prevent many health problems, this is something to be maintained over extended periods of time and alone will not help deter COVID, Wagner said.

He stressed that this holiday season, there are risks to be weighed – especially as Wagner predicted there may be more asymptomatic individuals infected with Omicron.

“Use caution and determine your risk level and health level,” Wagner said. “It’s all a numbers game; it’s all in how many people you’re around versus what you’re comfortable with. If you’re really in bad health, don’t go around people. If you’re fairly healthy and feel, ‘Even if I catch it, I’m sure I’ll be OK,’ then there are no issues … Your chances (of catching COVID) just increase with the more people you’re around.”

Reuters reported Tuesday that researchers at Imperial College London compared 11,329 people with confirmed or likely Omicron infections with nearly 200,000 people infected with other variants. So far, according to a report issued ahead of peer review and updated Monday, they see “no evidence of Omicron having lower severity than Delta, judged by either the proportion of people testing positive who report symptoms, or by the proportion of cases seeking hospital care after infection.”

Other studies, as reported by the Wall Street Journal, are optimistic that the hospitalization rates will be lower in cases of Omicron variant infection compared to previous variants.

High-risk individuals early into their COVID infection may be given monoclonal antibodies by their doctor. Wagner said this treatment is administered via transfusion by medical professionals and stressed this is not a preventative measure.

“It’s kind of like a blood infusion. It actually has to be done in a hospital,” Wagner said.

Limited supply and cost is why the criteria for receiving this treatment is selective, Wagner said.

On Wednesday, the Food and Drug Administration approved a Pfizer pill that seeks to quell the serious effects of COVID. As the St. Louis Post-Dispatch reported, this pill will be in limited supply and is only authorized for those with the disease who are highly likely to face hospitalization.

Many have also been discussing Merck’s COVID-19 pill, which Denmark recently approved for at-risk patients.

How the pill will be distributed in the U.S. – and whether or not it will be accessible to everybody – should it be approved is still up in the air, according to Wagner. It might be prescription only or eventually may be over-the-counter.

On Thursday, the Centers for Disease Control and Prevention endorsed its Advisory Committee on Immunization Practices recommendation expressing a clinical preference for individuals to receive an mRNA COVID-19 vaccine (Moderna or Pfizer) over Johnson & Johnson’s vaccine. This unanimous recommendation followed a discussion of the latest evidence on vaccine effectiveness, vaccine safety and rare adverse events, and the abundant U.S. vaccine supply.

The committee reaffirmed, however, that receiving any vaccine is better than being unvaccinated.

The CDC also recently endorsed the Test to Stay strategy being used in schools across Illinois. Wagner said while the SHIELD tests used in the program in local schools have not been discovering a lot of positive cases, he believes the strategy is helping cut down on unnecessary exclusions of close contacts from schools.

Wagner said a total of 330 shots were administered to local schoolchildren (ages 5-11) during vaccine clinics held Dec. 14 at Parkview Elementary in Columbia and Dec. 15 at Zahnow Elementary in Waterloo. These were a mix of first and second doses.

On Monday, IDPH data showed 57.21 percent (19,643 residents) of Monroe County’s eligible population is fully vaccinated. A total of 7,957 booster doses have been administered in Monroe County.

The local health department will host a Moderna clinic (ages 18 and older) from 1-3 p.m. Thursday, Jan. 6 at Rock City in Valmeyer.

Those in need of a COVID vaccination do not need to wait until the new year to do so. Doctors offices and area Walmart, Walgreens and CVS Pharmacy locations offer vaccines. To find a vaccine location near you, click here.