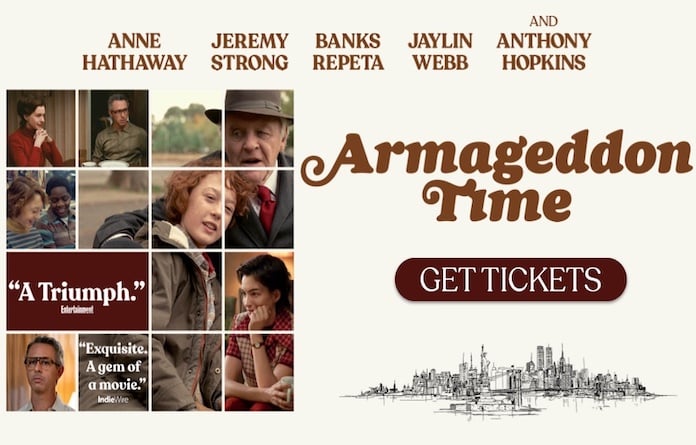 At first glance, writer-director James Gray’s fictionalized, yet semi-autobiographical “Armageddon Time” seems dark and gloomy with largely unlikable characters. However, this movie is one that audiences must ruminate on a bit before casting final judgment.

Gray revisits 1980, a time in which much of our country was experiencing anxiety about one thing or another. Ronald Reagan is about to be elected President. There are wars and rumors of wars. Biblical Armageddon is talked about, with the punk rock band “The Clash” recently coming out with a song mirroring the movie’s title (although the song title is actually spelled “Armagideon Time”).

We are introduced to the Graff family, Esther (Anne Hathaway) and Irving (Jeremy Strong), their two sons Paul (Banks Repeta) and Ted (Ryan Sell), plus Esther’s elderly parents Aaron (Anthony Hopkis) and Mickey Rabinowitz (Tovah Feldsuh). With the addition of Aunt Ruth (Marcia Haufrecht) and Uncle Louis (Teddy Coluca), the extended family is depicted as a spirited bunch who argue and holler around the table as they talk about the future of the country as well as the success of their family.

Young Paul is the fresh-faced and pleasant looking protagonist of the story, based on Gray as a 12-year-old I’m guessing. It’s a good thing that Repeta smiles and looks sweet; that’s about all the character has going for him. The kid is rotten. He lies. He steals money from his mother’s jewelry box. He is disruptive and disrespectful at school and at home.

His redeeming qualities of befriending classmate Johnny Davis (Jaylin Webb), a poor kid who lives with his ailing grandmother, serve to endear him to the audience, but doesn’t always get the job done. Still, it’s nice to see the friendship and hear the two sharing their interest in space and listening to Johnny’s dreams of becoming an astronaut.

Even though their Jewish family has a history steeped in prejudice, most of the Graff/Rabinowitz family openly remark about “the blacks” and are outwardly racist. One evening, as Johnny tries to visit Paul’s home, Esther remarks to the boys that their father saw “a black boy” running around behind the house. It’s as if that moment suddenly causes Paul to realize, maybe for the first time, that his friend Johnny is black.

As we see the family cope with the normal family struggles and ideals of the time, we are reminded that some folks are privileged and some are not. Hopkins, the brightest spot in the movie, delivers the pep talks we all need to hear; reminding us what really matters in life and how we all need to rise above the edicts of a warped society.

Yes, Hopkins is lovely and solid, as usual. Even when he mumbles a bit or shuffles around, his character is articulate, lovable, endearing; his Aaron Rabinowitz serves as the moral compass of the family and impacts each one of them.

Repeta is lively and vivacious, but has obviously had too much direction to be smiley and adorable. As I said before, his character is a little stinker, and I’m not sure his cherubic look is the right fit for this character.

Hathaway and Strong are wound tight as the long-suffering parents, but both exude a good balance of warmth and vulnerability with their characters. Two strong performances.

As Johnny, Webb is fantastic and tragic. His quiet acceptance of his own future is heartbreaking to watch, yet we still see enough determination in him to hope for the best and happy ending for his character.

At the abrupt end of the movie, as I said earlier,  I was a little put off by a lot of things I had just watched. But again I say, this is not a movie to judge quickly. When one is able to see that Gray may have intended the whole movie to be seen from his adult perspective, yet coinciding with his 12-year-old’s perception, the audience may be able to accept, ponder and understand much better.

There were a few uncomfortable moments in the story, in addition to a silly depiction of Donald Trump’s sister (Jessica Chastain) and father (John Diehl, complete with orangish Trump makeup) appearing at an assembly at the private school Paul and Ted attend. Haven’t we had it up to here with “anti-Republican” crap in movies, in addition to constantly trying to find ways to villainize and crucify the Trumps? Enough already.

For those reasons, I give the movie a B. It is a picture I would recommend, especially because of the strong performances and the crown jewel, Sir Anthony Hopkins.

Armageddon Time is rated R for language and drug use.  It opens in theaters Friday, Nov. 4. Running time is 1 hour, 55 minutes.