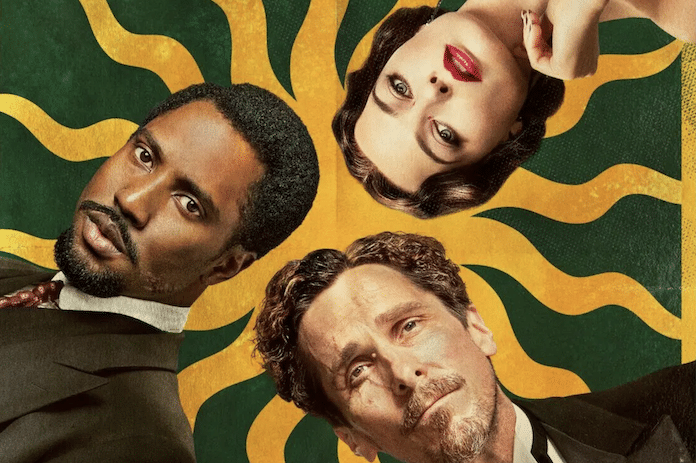 As both a lifelong student of history and a person with a great appreciation for fine acting skills, I had high expectations for 20th Century Studios and director David O. Russell’s “Amsterdam,” set to open October 7 in theaters.  Russell, after all, directed such films as “Silver Linings Playbook,” “American Hustle,” and “The Fighter.”  He gives actors (which did not include Jennifer Lawerence or Bradley Cooper this time) plenty to do in his movies and it’s pretty evident he can direct.

So what the heck happened?

Is he one of those directors who lets the cast do their own thing and hopes for the best? I am wondering as I reflect on this confusing picture.

The movie opens with the words “A lot of this really happened.” OK. We already knew that  happens with most historically based movies; there is a certain degree of fictional aspects and some creative license taken.

When one looks a little deeper and does a little research, we see that the movie is loosely, very loosely based on a coup in the early 30s to overthrow the government and get a little fascism going.  This was during FDR’s presidency. You can read more about it on your own, and you really need to.  It may possibly help you understand the picture a little better.

The movie stars Christian Bale, John David Washington and Margot Robbie, who play three friends brought together in France by the first World War.  In flashbacks we see Bale’s Burt Berendsen, a doctor, meet up with Washington’s Harold Woodman, a future lawyer who is a member of an all black regiment during the war.  When the regiment protests their treatment, a kind and solid General William Meekins (Ed Begley, Jr. in a cameo) brings in the kind and capable Berendsen to command the regiment, which gains both men the undying loyalty and respect of the group.  Burt and Harold, both wounded severely during battle, are nursed back to health by kooky nurse Valerie Voze (Robbie), who appears to be a free spirited bohemian collecting bullets and pieces of shrapnel she picks out of the bodies of her patients.  As Burt and Harold convalesce, they become fast friends with Valerie and agree to travel to Amsterdam with her, where they not only continue to convalesce but are given plastic surgery and prosthetics from wealthy friends of Valerie who just happen to run a glass eye company.  Michael Shannon and Mike Myers are the charming friends, who also happen to lead other lives as ornithologists and spies.

The loveliness and carefree holiday in Amsterdam comes to an end.  The romance between Valerie and Harold thrives there, but one day all three of the friends realize that they must return to their old lives to do good things.  Valerie disappears, John returns to America to pursue a law degree, and Burt returns to the Park Avenue medical practice he shares with his blue-blooded father-in -aw.  After trying to help WWI vets with their medical needs, Burt is blackballed by his wife’s snooty family and the medical community.  He reconnects with Harold, and the two soon find themselves caught up in a murder investigation.  Valerie resurfaces, and the three pursue the truth.

But even that last paragraph doesn’t do justice or fully explain all the twists, turns, and side stories. Think it’s hard to follow my explanation? Try watching the film.

As I said, I had high expectations. I mean, Christian Bale alone usually fascinates me.  Here, he seems to channel Peter Falk.  Indeed, when the murder investigation begins, the movie starts to resemble an old episode of “Columbo” with quite the whodunnit quality as well as the humorous mugging and goofiness of Falk, I mean Bale. Bale does seem to be having a good time here, but his character never seems to have any continuity or more than one note.

Washington has a suave and cool persona, and his performance may be the closest to becoming interesting.  Robbie is luminous and beautiful, but she can’t make this weird character appealing enough to make a difference in the movie.

There are supporting characters who also try to bring something more to the picture.  Myers makes you want to laugh out loud each time you see him, but simply because we are so used to him doing something over the top and silly.  Rami Malek as Valerie’s sinister brother and Anya Taylor-Joy as his wife both seem to be caught in a silent film in which jerky movements and wide-eyed reactions are the acting style of choice.  Chris Rock’s character buffoons around the story, reacting loudly to things and hollering about things that can probably be heard in his stand up routines.  Robert DeNiro appears near the end as another well-known general but appears to just be putting in his time for the paycheck.

It’s a shame that all of them weren’t given better direction. It is quite evident that Russell approached this story with a smugness and a “I can’t miss” attitude. Each scene seems to be pushing the quirky and strange quality seen in Wes Anderson’s films.  I mentioned to a person sitting next to me that I hadn’t felt this weirded out since I saw “The French Dispatch.”

As always, I try to find something redeeming in a film I dislike.  I did enjoy seeing these actors, despite this flop of a movie.  I’m sure they did the best they could with the tools they were given, but again I say it’s a shame.  Considering the story this one was based on and the acting chops of this cast, this movie could have been one of the best this year.

Instead, it’s one of the worst.  If not the worst.

It’s muddled, confusing, and just plain weird.  Sorry folks, that’s the best I can do.

I’m not giving this one a grade this time.  If this movie were a paper in my classroom, I would most likely write “Incomplete: revise and resubmit”.

With a big, red ink pen.

“Amsterdam” is rated R for blood and violence and opens in theaters on Friday, October 7.  Running time is 2 hours and 14 minutes.