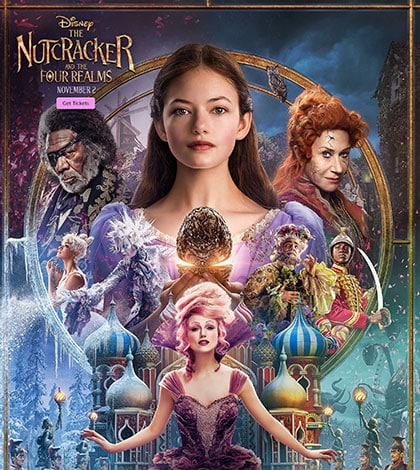 I am constantly bemoaning the issues with the attention span of the general public, and how movies have been cut and pasted to appeal to the ever dwindling ability of audiences to attend to a good two-hour story.  I must say Disney’s holiday offering The Nutcracker and the Four Realms does a fine job at fitting a good story into a neatly packaged 90 minutes.

The classic tale is offered once more with some new spins on many of the familiar story elements.  If you are going to see dancing, you’ll see it.  However, this movie does not place the ballet we are used to in the forefront.  The familiar tune and some of the dancing we have known to be associated with this story are there, but I’d venture to guess that most fans of The Nutcracker will be a bit disappointed when it comes to the small amount presented.

Still, I’m also thinking that the rest of the movie will redeem itself, and audiences will be forgiving.  The Nutcracker himself, played by Jayden Fowora-Knight, has a more minor role in this offering, mainly due to the fact that the daughter of the original protagonist is now the heroine of the story and main character.  This heroine Clara, played by the exquisite Mackenzie Roy, sets about saving the inhabitants of the magical Four Realms, a world her mother discovered long ago.

The story includes elements of many fantasy stories; fans of C.S. Lewis will note similarities to his books, but there are several nods to other fantasy stories throughout this movie. Appearances by Morgan Freeman as Clara’s godfather and the fantastic Helen Mirren as the leader of the fourth realm, Mother Ginger, add to wonderful performances by a solid cast.

However, the standout role seems to be that of the Sugar Plum fairy, played by a “deliciously” wicked Keira Knightley, who steals the show.  She does something that is hard to do: she brings depth and multiple layers to a somewhat silly and (excuse the pun) flighty character. She’s outstanding.

The movie brings some modern-day elements to the table as well as a message that applies to the world we live in today.

It’s sure to be a classic.  Both boys and girls will love this movie as will their parents.

The Nutcracker and the Four Realms is rated PG for mild peril and runs 90 minutes.