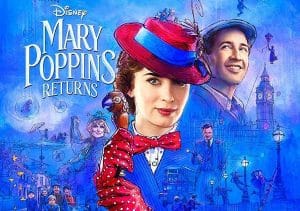 It’s difficult to go into a sequel with high expectations, especially if the sequel is for a classic movie like “Mary Poppins.”  The sequel, “Mary Poppins Returns,” opens today with Emily Blunt in the title role as the famous nanny, who hasn’t aged a day since we last saw her.

This time, she visits the Banks home again, only to find Michael Banks (Ben Whishaw) a widower with three small children and his home in danger of repossession. Sister Jane (Emily Mortimer), a 1930s political activist, fills the role of the empowered woman that is required of all Disney movies these days.

Mary Poppins sets about cleaning up and taking the children on fanciful journeys, but she does little to actually help the weak plot along or solve any huge problems. At the end of the movie, when the predictable “Thank you, Mary Poppins” is uttered, audiences are left wondering “For what?”

That being said, the movie is still fun and enchanting in spots, thanks in large part to Blunt’s performance. I noticed that her Mary was a little more arrogant, a little less smiling and a bit sterner than the original version; I was glad Blunt made the character her own and didn’t channel Julie Andrews. It’s always interesting to watch Blunt with her withering glances and over the shoulder condescension.

There are some musical numbers that are sweet, and some that are irritating. Lin Manuel-Miranda’s lamplighter character pays tribute to Dick Van Dyke’s “Bert,” but much of what he does is silly and unnecessary and he is clearly in the movie to add the current and popular actor vibe.

Julie Walters is always wonderful, and the little she is given to do as housekeeper Ellen steals the scene. Cameos by Meryl Streep, Van Dyke and the stupendous Angela Lansbury add silliness, nostalgia and sweetness to the mix. Oscar winner Colin Firth is given little to do as the villain, but still, the supporting cast is strong and all of the acting well-done.

I would recommend that you go see it, as it is best seen on the big screen. However, don’t expect any huge nods to the original or any nostalgic warm “fuzzies.” You will be charmed and entertained: It’s a fun movie.

“Mary Poppins Returns”  is rated PG and runs 130 minutes. My grade: B-