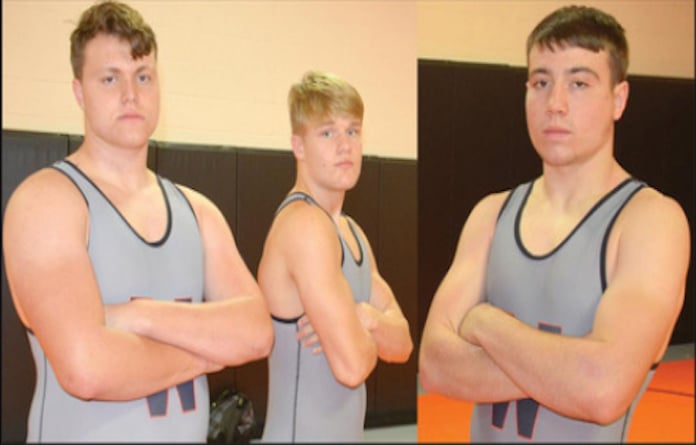 The Waterloo High School wrestling team continued one of its best seasons in school history by qualifying three wrestlers for state by virtue of strong performances at the Mascoutah Sectional over the weekend.

Jordan Sommers, a sophomore who is ranked among tops in the state at 195 pounds, followed up his regional championship with a sectional title to advance to state. He was declared the sectional winner at 195 pounds after his opponent, undefeated Mitch Hutmacher of Chatham-Glenwood, was forced to forfeit about a minute into their match due to injury.

“Out of respect, Jordan refused to stand on the No. 1 spot on the podium,” WHS wrestling coach Chase Guercio said. “(It was) my proudest moment of the day.”

Sommers is 28-4 on the season and goes into the state tourney as a No. 1 seed.

“He has always said it was his goal to be the first state champion in Waterloo history,” Guercio said.

Also advancing to state for the Bulldogs were Brandon Lloyd at 160 pounds and Brett Howard at 285 pounds.

Lloyd, also a sophomore, won his semifinal match on Saturday to pick up his 39th win of the season, setting a new single-season record for victories at Waterloo. He ended up placing second in his weight class.

Lloyd is 39-11 on the season, with seven of those losses coming against Jerseyville senior Zeke Waltz, who is ranked No. 2 in the state.

“They continue to see each other at every tournament we go to, but Brandon has worked to close the gap,” Guercio said. “Lloyd is one of those athletes that every coach wishes he had. He works hard, keeps good grades and is incredibly coachable. He attacks his opponents with a fearlessness to where you have to remind yourself sometimes that he is still a 16-year-old kid. He has a bright future ahead of him.”

Howard, a junior, placed fourth in the 285-pound weight class to also earn advancement to state. He is 37-9 on the season and was a Mississippi Valley Conference first team all-conference selection.

“Before today, there had only been four state qualifiers in Waterloo wrestling history,” Guercio said.

Waterloo sent six wrestlers to the sectional this year, tying the school record for most in one season.  The three state qualifiers in the most Waterloo has advanced in one season.

“These athletes are incredibly talented, but what sets them apart is their attitudes,” Guercio said. “All three of our state qualifiers are excellent young men who have participated in philanthropic events throughout the last year, such as our Gifts from Grapplers campaign. They also give back to the little league wrestlers and serve as tremendous role models for them. We always talk about how champions are well-rounded. Very few people succeed without tremendous character, which is what each of these kids has.”

Guercio praised assistant coach Rodney Newbury as the catalyst of the program.

“He brings tremendous experience as a former state placer in Missouri and college wrestler himself,” Guercio said. “He does tremendous work for our kids and shows up to every practice while juggling a full-time job outside of the district. Rodney is always positive with the kids and they love to have him around.”

Guercio said he is excited to be attending the state wrestling tournament in Champaign this weekend for the first time as head coach.

“But we aren’t going as fans,” he stressed. “We want to turn some heads.