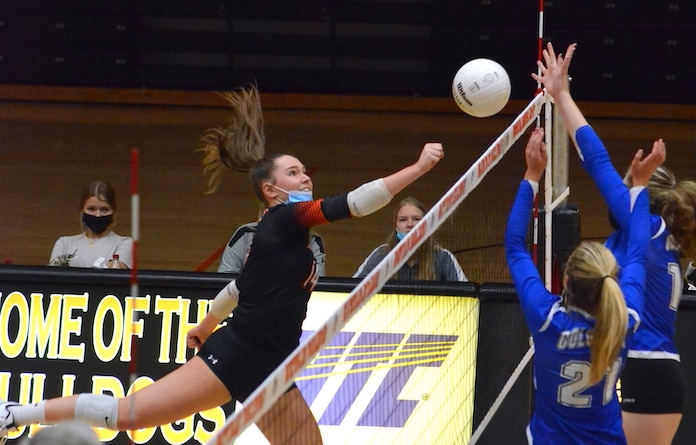 With regionals looming, the Waterloo High School volleyball team is setting its sights on a deep postseason run.

The Bulldogs finally had their long winning streak snapped at 19 games with a loss to a tough Nashville squad at the Monster Mash tournament in Freeburg on Saturday, but the team is charging on.

Paige Montgomery and Ella Bockhorn were named to the all-tourney team for the Bulldogs.

Prior to the Monster Mash, Waterloo topped Mascoutah last Tuesday and Triad on Thursday, clinching a Mississippi Valley Conference championship.

“It has been a tremendous experience that not many coaches/programs experience. I know after coaching for over 20 years,” Waterloo head coach Angie Crawford said of her team’s success. “The girls and I are cherishing this opportunity and not taking it for granted.”

Crawford added that Waterloo’s 25-5 overall record is an “absolute team effort,” with everyone playing vital roles.

The first set was a back-and-forth affair, with neither team creating much separation until Waterloo pulled away at the end.

In the second set, Waterloo went up 11-5, prompting an Eagles time out. Columbia cut it to 12-9 before the Bulldogs rallied again.

Columbia made a furious comeback to cut it to 23-18, but the rally was halted by a serve that went too deep.

Waterloo concluded the regular season Tuesday at Highland with a win before playing Tuesday in the Class 3A Triad Regional against either Triad or Jerseyville. The regional final takes place next Thursday.

Paige Montgomery leads the team with 170 kills. Josie Briggs leads in points with 133. Schwehr is tops with 424 assists. Emma Day leads in blocks with 48 and Davis leads in digs with 315.

Columbia (18-13) was led by Sophie Gill-Kemper in the loss to Waterloo. She had eight kills. Karsen Jany recorded three blocks.

Columbia plays Wednesday at Granite City and Thursday at Freeburg to close out the regular season.

The Eagles open Class 2A Red Bud Regional play Monday against Red Bud. With a win, they would play Freeburg on Tuesday.

Gill-Kemper leads the Eagles with 140 points, and 167 kills. Katie Toenjes leads in assists with 223. Jany is tops in blocks with 79. Addison Walton leads in digs with 530.

Gibault (15-15) won first in the silver division of Saturday’s Monster Mash at Freeburg, with Abby Grohmann named to the all-tournament team.

Gibault concluded its regular season Tuesday at Freeburg and will open Class 1A New Athens Regional play this coming Tuesday against Sandoval. With a win, the Hawks would face the winner of Dupo vs. New Athens on Wednesday.

The loss snapped a seven-match winning streak for the Pirates, who are unbeaten in their division entering Thursday’s regular season finale against Lebanon.

The Pirates begin Class 1A Metro East Lutheran Regional play next Wednesday against the winner of Father McGivney vs. Madison.

Dupo (10-14) won 25-18, 27-25 over New Athens on Thursday. Cecilia Armstrong had 11 points for the Tigers, who close out the regular season Wednesday against Steeleville before playing in the New Athens Regional.