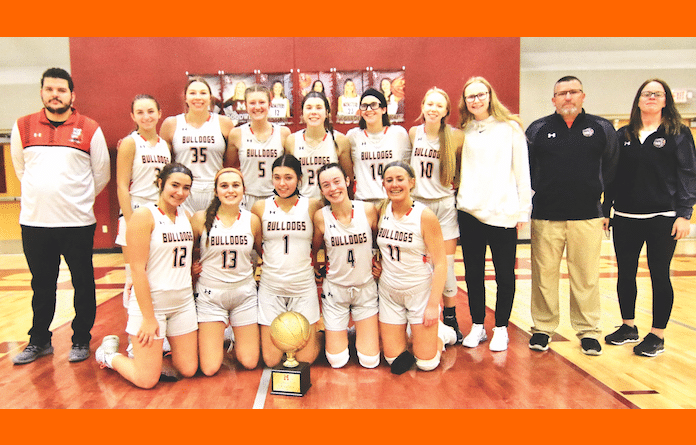 The Bulldogs came, they saw and they conquered yet again.

On Monday, Waterloo returned to its home court in style with a 52-38 win over Monroe County rival Columbia. In the process, the Bulldogs set a new single-season wins record for the program with 18.

Waterloo jetted out to a 15-1 lead after one quarter over the Eagles on Monday, sending the Bulldogs faithful into a frenzy. Columbia went on a 16-6 run in the second quarter to keep it close at halftime, but Waterloo ultimately pulled away.

Gum scored 18 points and Colson added 13 points for the ‘Dogs, who host Highland on Thursday.

Gum, a 6-foot-tall junior, is averaging 18 points, 9.1 rebounds and more than two steals per game on the season.

Colson, a sophomore, is averaging eight points, five rebounds and more than two steals per game.

Karsen Jany, a junior, leads Columbia this season at 14.6 points per game. She also averages 5.2 rebounds per game and is shooting 35 percent from three-point range.

The Hawks lost games to Columbia, Althoff, Carlyle and Marissa at the tourney.

On Monday, the Hawks lost a non-tourney tilt against Althoff, 59-33.

Bri Baldridge, also a sophomore, is averaging 8.4 points and 4.2 rebounds per game.

Dupo (8-6) went 1-2 in the Christ Our Rock Lutheran High School Tournament over the holidays.

The Tigers won 42-29 over Bluford Webber to open tourney play. Octavia Heidelberg led the way with 12 points, 12 rebounds and seven blocks for Dupo.

That win was followed by a 64-37 loss to Staunton and a 52-22 defeat at the hands of Greenville, however.

Heidelberg leads the Tigers at 14.3 points, 12 rebounds and 2.4 blocks per game this season.

Valmeyer (3-7) has been idle since Dec. 20. The Pirates return to action Thursday at Lebanon.