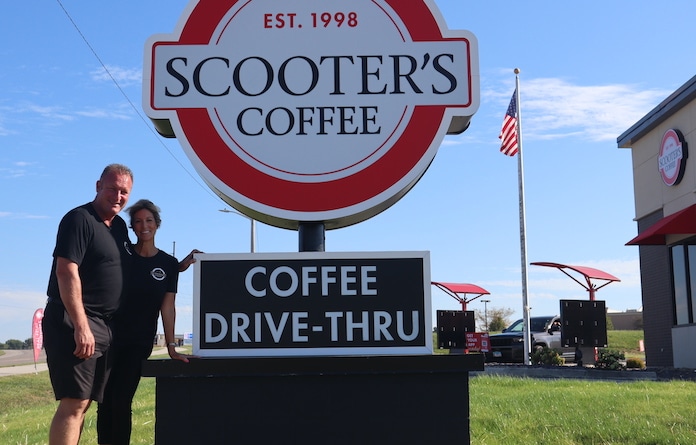 The franchise, which opened in late August, was met with a packed drive-thru line during its first few days of operation. Owners Kim and Kevin Schwartz don’t expect business to continue quite at that level, but they’re still optimistic about the future.

“We think it’s still gonna be well supported,” Kevin said. “I think we’ve done a pretty good job of establishing with our customers a great experience. We strive every day to get faster and faster and still maintain a consistent quality drink or food.”

The Schwartzes, who have lived in Columbia for 17 years, had been looking to open up a franchise business for some time but couldn’t find a company that met their needs.

Kim and Kevin – with their respective experience in sales and food sales – weren’t interested in working with fried foods or any other kind of food production.

They ultimately ended up finding Scooter’s, and with its emphasis on drinks and pre-prepared food as well as the support the company gave them during development, they’ve been quite pleased with the experience.

“Scooter’s came about and we both fell in love with it,” Kevin said. “And so we said we’re going to go for it and have not regretted it one bit.”

The Schwartzes added that they hope to improve their service and maintain quality for customers going into the future. They thank their current manager Stephanie Eschmann for her organizational skills and other contributions to their strong start.

Scooter’s will host its  grand opening on Friday, Sept. 30, during which customers can receive half off when they pay with the Scooter’s Coffee mobile app.

Scooter’s Coffee CEO Todd Graeve stopped by the new location at 808 N. Illinois Route 3 in Waterloo last week to briefly discuss the history and goals of the company.

Scooter’s, which will be celebrating its 25th anniversary next March, was started by Don and Linda Eckles in Bellevue, Neb.

The business began as a single store that eventually grew to include multiple locations until the decision was made to begin franchising.

“After a couple of years friends and family began asking ‘Hey, I’d like to own one of those Scooter’s,’” Graeve said. “And so Don made the decision at that time to begin to franchise.”

With the Eckleses also founding Harvest Roasting in Omaha to supply their coffee and baked goods for distribution, Scooter’s experienced a period of substantial growth Graeve said is still going on.

Graeve spoke about the company’s goals and values. Though Scooter’s franchises are built to be drive-thru only, the company stills hopes for a relationship between the customer and barista.

He also spoke about the impact a franchise coffee chain like Scooter’s might have in a community like Waterloo. Graeve explained that Scooter’s biggest competitors tend to be other coffee chains like Starbucks or Dunkin’ Donuts.

Local cafes like Bean Tree Cafe in downtown Waterloo, he explained, tend to cater to a different customer base.

“We love that those businesses exist. It’s a little bit different customer experience,” Graeve said. “That’s a cafe in a downtown community serving a certain customer base in that downtown community, and we’re focused more maybe out on the outskirts with drive-thru.”

A similar sentiment was expressed by Bean Tree Cafe owner Lisa Jones, who said Scooter’s effect on the business was mixed.

Jones said September already tends to be a weak month when it comes to business, but the new coffee franchise’s presence hasn’t had a clear impact.

While the already small amount of drive-thru business they’ve gotten since it started offering that option during COVID might be affected, Jones said Bean Tree’s food, location (219 S. Main Street) and quality of drinks help them stand out in the community.

“When the dust all settles and the newness wears off, I don’t know that we will have lost, really, too much,” Jones said of Bean Tree Cafe. “We’re still the hometown coffee shop.”