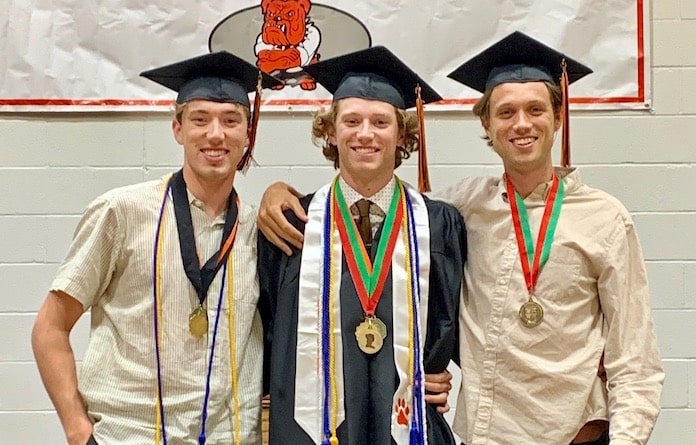 As a child, he was more apt to fish and play sports than spend hours tucked away in his room, head-first into a book.

In fact, Ian doesn’t particularly enjoy reading at all.

However, that never stopped him from becoming valedictorian of the Waterloo High School Class of 2022.

With the honor, Ian followed in the footsteps of older brothers Max and Ross, who were also WHS valedictorians.

Ian put effort into his educational pursuits while participating in a multitude of extracurricular activities.

“I had to kind of find a balance of what I prioritize,” he said. “When I would get home from a basketball game at nine o’clock, I would be like, ‘all right, well, I got to do some homework.’”

For four years, Ian mastered a balancing act impressive to both students and peers. A three-sport athlete, an officer in the National Honor Society, and a Waterloo FFA member, the young man’s schedule was filled beyond what was expected of him.

All three Schrader brothers were key members of the WHS basketball program during their time at the school.

However, Ian said older brothers Max and Ross applied little pressure on him to achieve the same feats as them.

“(My brothers) actually helped me a lot,” Ian said. “Anytime I had a question about what classes to take, how to do this, how to do that. They were always there for me.”

In fact, it was Ian’s own admiration for his siblings that motivated him to continue working toward high honors in his studies.

“I remember watching my oldest brother Max speak at his graduation,” Ian said. “And I was just like, wow, that’s really, really cool.”

However, Ian faced a daunting obstacle during his academic career that neither he or his brothers could have anticipated — the COVID-19 pandemic.

The Waterloo School District had closed down in March 2020, which was Ian’s sophomore year of high school. For the next two years, Ian and his peers learned to adapt to a contactless classroom.

“The rest of that school year was basically just a wash. I would have to say, like, none of the teachers knew what to do, we didn’t have a plan for anything,” he said. “Learning then was entirely on your own. I mean, (if) you wanted to learn something, you actually had to put in the time to do it — a teacher wasn’t gonna be on a Zoom call telling you (to).”

Despite the adjustments and adaptations to his learning, Ian feels the pandemic had a positive effect on his development as a student. With the newfound freedom online learning provided, it also necessitated discipline on his own part.

“In college, we’re going to have so much more responsibility, with so much more freedom to do whatever we want,” he said. “I think COVID kind of allowed us as high schoolers to see what we needed to change to be able to be prepared for college.”

When classes began in-person his senior year, Ian initially was taken aback. After almost two years of online and semi-online learning, it felt almost surreal to be sitting inside a classroom.

With paper tests and hour-long lectures, the pressure began to weigh on a class with only a year and a half of conventional high school experience.

“Senior year, I really had to get back on that track of listening to the teachers, (doing) homework every single night,” he said. “(It) was kind of a rude awakening.”

However, Ian was able to adapt similarly to how he had during the start of the pandemic. After a period of adjustment, he soon achieved high honors and was the valedictorian of his graduating class — just as his older brothers before him.

“Seeing Ian become a valedictorian meant a lot to me. It makes me proud to be his older brother and proud of my parents,” Max said. “We are so lucky to have grown up with my parents in Waterloo. I’m also grateful that I get to have two intelligent best friends for the rest of my life, and really excited to see the futures that they make for themselves.”

Like Ian, Ross watched Max become valedictorian of his own graduating class and felt an immense sense of pride.

“I was in a unique position, getting to look up to my older brother Max and then getting to cheer on Ian later on,” Ross said. “With how involved Ian was in sports, extracurricular activities, work, and his podcast, I was confident that he would be able to pull off being a valedictorian.”

However, Ross realized that while good grades were important for his future, it didn’t determine his successes.

“It was great to be honored for my hard work,” Ross said. “However, I soon realized that success is so much more than getting perfect grades. Success is more about who you are, the work you put in, and the relationships you build along the way.”

Ian plans on attending the University of Illinois to major in agricultural and biosystem engineering. Inspired by his life-long interest in farming and his concern during the recent food supply decline, he plans on creating systems to support and feed a growing population.

Despite being valedictorian, Ian intends on living life in addition to his studies.

“In college, I think I’m gonna (just) really get involved in everything that I can,” he said. “There’s so much more learning that goes on outside of the classroom than inside.”