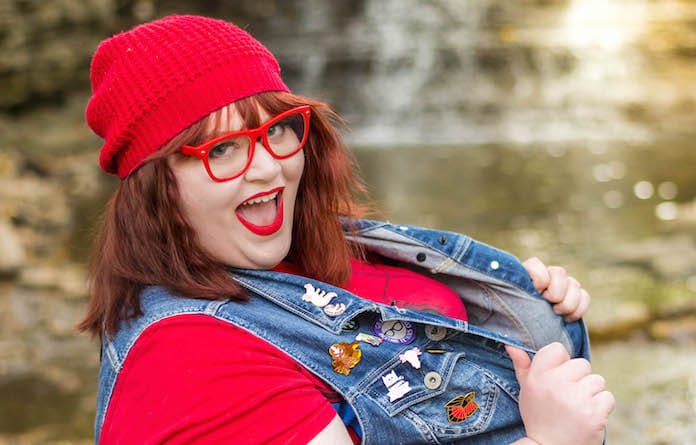 Fifteen years ago, a young Jess Anderson submitted a story idea to her English teacher. Now, she has turned this fictional world into her debut novel.

“I actually came up with the original idea for the series when I was 12,” the Red Bud native said. “I’m one of those people who just daydreams a lot. I zone out and start making up worlds in my head, and that was just one of the worlds that I happened to think of at the age of 12. So, then I ended up writing a whole story about it … and then I just let it sit for a while and revisited it, clearly, more recently.”

The result of this was “Mercy’s Light,” the first installment in Anderson’s Keepers Trilogy. The young adult novel takes place on Novus Aitus, which is Earth hundreds of years into the future. In the series, magical beings called keepers have come to the planet to help restore balance. Mercy Validus is the last keeper of light, or so it’s believed, and is forced into hiding as the powers that be are trying to wipe out all of his kind. That’s when Mercy must make a choice and begins the journey to bring other keepers of light out of hiding and back to the planet.

The original concept for the Keepers series was not the only short story Anderson wrote growing up. Anderson said she entered numerous writing contests throughout grade school and high school, but her dream of becoming a writer was put on a back burner in college. That is, until she began working toward her master’s in film.

“When I graduated high school and went off to college, I would write as a hobby, but I never really planned on doing anything with it,” Anderson said. “Then I went to grad school and I started realizing I really liked storytelling, so I started revisiting it. I started doing some screenwriting for short films … and helping other film students do short films.”

Eventually, a professor gave her the push she needed to start translating her stories on paper. Anderson said praise from friends and family further validated this choice.

“Honestly, if it wasn’t for my friends and my family pushing me and their reactions when reading the original version of the story and everything, I don’t think I would have actually taken the leap to do it.”

The pandemic eventually caused Anderson to be laid off, providing her with an unexpected opportunity.

“In April of this year with the pandemic, I got laid off from my full-time job,” Anderson said. “My friends and family were just like, ‘Take a couple of months and just focus on the writing, get the book out. You can do it.’ And that’s what I’ve been doing now.”

Having been a creative since childhood, Anderson said events when she was young naturally influenced her writing.

Anderson said many of the book’s pivotal plot points draw from hardships that shaped her own life.

“I feel like some of my best quotes from this book and moments in the book (are inspired by) stuff I had to go through, and I’m trying to share that with people and let them know they’re not alone in how they’re feeling,” Anderson said. “It does touch a lot on grief and childhood trauma in the book, and there’s a lot of good conversations on how to cope with things, not wanting to give up and how there’s always hope for your future.”

The main thing Anderson wants the reader to take away from “Mercy’s Light?” It gets better.

“You might be going through something really crappy right now, but down the road, things are always going to get better and you are not going to be stuck in that same spot forever,” Anderson remarked. “I think that’s really what I was trying to get across with the entirety of the book: Where you are now is not where you’re going to be a year from now, or 10 years from now. I wish that was something I knew when I was a kid.”

Anderson said this message is apparent in “Mercy’s Light” through the resilience of its main characters. Each member of the central trio has their own backstory riddled with hardship, yet they still press on to make life better for themselves and others.

“Mercy’s Light” is available for purchase on the Barnes and Noble website and on amazon.com. To learn more about the Keepers Trilogy, visit mercyslight.com. Keep up with Anderson on Instagram and Twitter @stressinabox.