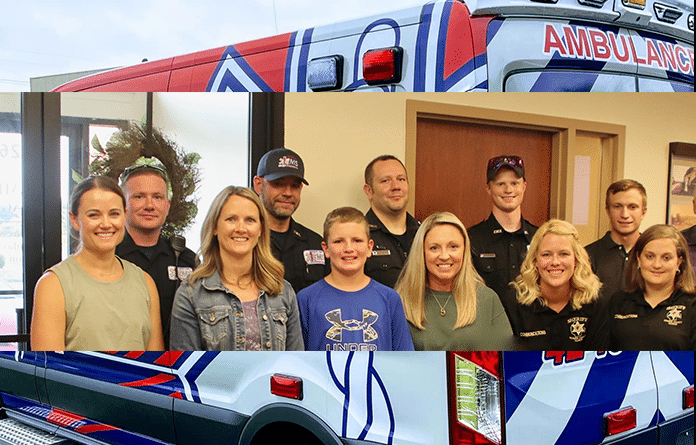 The Valmeyer Village Board meeting last Tuesday night was at standing room only capacity as family members, and first responders were given official recognition by the village for quick and decisive action which resulted in a young boy’s life being saved after a drowning scare near Valmeyer in late May.

“We are so grateful to live by such knowledgeable and courageous first responders,” said the mother of the child.

“Saying ‘thank you’ seems so small during these times but I hope each and every one of you know it truly comes from our hearts in the greatest of respect,” she added.

Valmeyer  Police Chief Marty Seitz began the recognition ceremony by recapping the events of May 29.

“In a day and age where there’s always doom and gloom, we have a happy story with a happy ending,” Seitz began, adding that “without everyone’s effort, it may not have been.”

According to Seitz, Monroe County Sheriff’s Department dispatch personnel received a call shortly before 4:30 p.m. for a child drowning victim on a property along Bluff Road south of Valmeyer.

He continued by explaining that during a gathering at a residence, the child was discovered unresponsive at the bottom of a swimming pool by Cody Rohlfing. She then alerted Trey Rohlfing, who was in the pool. Trey dove to the bottom and retrieved the child, and Cody helped get the child out of the pool.

Also at the gathering were Elise Rohlfing and Carol Bivins, both nurses, who immediately began CPR while waiting for emergency personnel to arrive on scene.

While the call was in the jurisdiction of Monroe County emergency services, Seitz was the closest to the scene and the first to respond.

“With any call involving a child, there’s an added sense of urgency,” Seitz said. “Anyone around is going to respond. It wasn’t my venue. It was Monroe County Sheriff’s Department’s, but I responded. My job was to get the AED there.”

An AED, or  automated external defibrillator, is used by first responders as a mobile device to help people experiencing sudden cardiac arrest.

“It’s a testament to their CPR skills because the AED advised ‘no shock,’” Seitz said. “I can’t tell you enough how incredibly efficient and amazing (Elise and Bivins) were. I truly think God put you guys there at that time and you did an outstanding job. There’s no other two people who could have performed the CPR as well as you ladies did.”

Seitz said the pair performed CPR for 10-15 minutes prior to his arrival.

“I offered multiple times to take over, but they were so good, they just kept on trucking,” Seitz continued, noting that “If you’ve ever done CPR, it is quite taxing, and that 10-15 minutes feels like an hour.”

A Monroe County EMS crew was the next to arrive. Seitz said paramedic Doug Franklin “came in like a linebacker, rushed to the scene, grabbed (the child) and took him to the ambulance.”

EMS personnel treated the boy all the way to the hospital, keeping his heart going even as he began to have seizures.

After several days of being unconscious in the hospital, the child has since recovered and has not shown any lingering effects as the result of nearly drowning just over a month ago.

He continued by also recognizing the people assisting behind the scenes.

“Dispatch was getting everyone alerted, coaching CPR, trying to stay calm in a chaotic situation – and not just the person on the phone,” Seitz said, pointing out the other dispatcher on duty “lined up” EMS, police and fire personnel to respond to the incident.

Furthermore, Seitz noted the EMS crew worked to prep the ambulance to provide lifesaving efforts on the way to the hospital.

The boy’s mother thanked Valmeyer and Monroe County first responders for the speed in which they reached the scene.

She also thanked MCSD dispatcher Tiffany Brewer for her “knowledgeable dispatch skills” and Monroe County EMT Matt Nungesser for his “calming voice is such a time of fear” – as well as Franklin for working from the time he arrived on scene to the time the ambulance arrived at the hospital.

“What they’re called upon to do, I don’t think we can understand or appreciate,” Heavner said of the first responders.

Heavner spoke of his time as a coach during FFA competitions while an educator in the Valmeyer school district. He recalled trying to calm students by saying no one would live or die based on their performance.

He then acknowledged Seitz for bringing everyone involved together for recognition in Valmeyer even though the incident happened outside village limits.

“I can tell you pretty simply why we’re doing what we’re doing. This man (Seitz) came to me and said we need to do it,” Heavner explained.

“I can’t pick out a better example of a hero. I’ve been with Marty on a couple of occasions when it was bad, and I can’t pick anyone who I trust more to do what he does,” Heavner continued. “He’s not getting an award or a plaque tonight, but he ought to. It was his actions that brought this whole group together. He is a true professional.”

Heavner then spoke about the teamwork involved throughout the first responder community in Monroe County.

“I think that what’s important … one person can’t do all the things that need to be done. It’s very easy to recognize one, two or three people and say ‘wow, you did a great job, everything  turned out rosy.’ Without the group of people here tonight, it wouldn’t have happened that way. We’re going out to a call that’s really not in our territory, because that’s what we do. (MCSD) does as well, they’ll come to us if we need help,” Heavner said, also acknowledging successful outcomes “take the procedures you guys have put in place.”

“We don’t thank people as frequently as we should. I am more than happy to do what we’re doing tonight,” Heavner concluded.