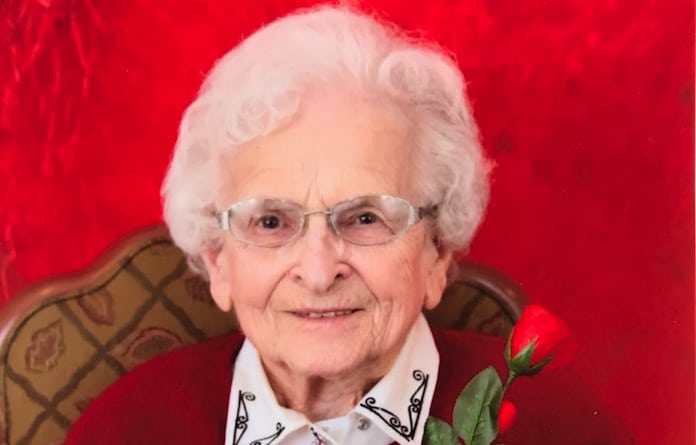 Werling’s family hosted an open house visit followed by another celebration hosted by GRACE Adoption, a group of volunteers who provide friendship to seniors.

GRACE members presented Werling with 100 handmade birthday cards that were signed by individuals from throughout the county.

Waterloo Mayor Tom Smith also presented Werling with a “Centenarian Certificate” on behalf of the City of Waterloo to commemorate her birthday. She was also recognized during a recent Waterloo City Council meeting.

Werling thanked Smith for the memento as well as everyone else for the cards, visits, phone calls and gifts that included a book of word-find puzzles and a magazine cover featuring Werling’s photo and events from her year of birth.

“I’d just like to tell everyone thanks for remembering my birthday,” she said, adding that the celebration was “spectacular” and that all involved did “a wonderful job.”

The birthday party kept everyone safe, with Werling celebrating from behind protective plexiglass.

“I have enjoyed every day,” Werling said of her 100 years. “I have been very blessed.”

Helen Louise Schmidt was born Jan. 21, 1921, in northwest Waterloo – near where Annbriar Golf Course is currently located – to Henry and Matilda Schmidt.

She attended Copp School with other children throughout eight grades in one building. She recalled that Janette Jobusch Richard was her first teacher.

Helen was also a member of the Waterloo High School Class of 1934, the first graduating class of the then newly-formed community high school.

After high school, she began working for the Petri Insurance company, a position she held for 40 years until her retirement.

Helen married Nelson Werling in 1972. They lived the farming life on Gall Road for 26 years before moving to the Crackerdale House in north Waterloo.

Helen said that it was a “wonderful life” on the farm and she “enjoyed it very much.”

The couple lived in the Crackerdale House only a short time when Nelson passed away in 1998. Helen continued living there until 2014 when she moved into Magnolia Terrace at age 93.

She now resides with Dottie Pieper in the Oak Hill facility.

When asked for the secret to long life, she responded, “Live a good life, stay healthy and keep working.”